This has been around for while now. CGU is one of our larger insurance companies and they started a new advertising campaign a few months back.

'Bill' was the first one they made in the series and they ran it a few times late at night then we didn't see it again for weeks.

Then, CGU started started sponsoring the football on satellite TV and suddenly Bill is getting prime time spots at the weekend and he's becoming a minor celebrity.

Of course, he's not real and most of those animals were definitely chosen for character rather than show potential but he has been a great publicity boost for the industry here, especially as the campaign coincided nicely with national alpaca week.
Posted by Perry Wheeler at 9:18 AM 1 comment:

So, there I am at home, holding the fort while the rest of the family are over the border in Victoria at the Stawell Show with our core show team of:I’m waiting anxiously by the phone for the call about how things have gone. It rings and:

Perry: So, how did it go then?
Sarah: Disastrous!
Perry: What do you mean?
Sarah: We got two second places.
Perry: OK.... That’s not too bad really, who beat Gypsy?
Sarah: Gypsy wasn’t one of them... The seconds went to Drifter and Chorus Girl.
Perry: What? So... Gypsy, Puck and Lulu? How could Chorus Girl beat Gypsy?
Sarah: Oh yes... They all won their classes and Gypsy got best brown in show again.
Perry: %%&*#$!!!

It's enough to drive a poor harmless bloke to drink...

Three firsts and two seconds though, I'll forgive anything for that. After I calmed down, it turns out that it wasn’t a huge show. A few of the big Victorian breeders that we’d been hoping to go up against didn’t go but, it was still a great result. The judge said some wonderful things about Gypsy and Puck and there was lots of interest in all of the team from other breeders (none of them are for sale though).

So... This is second best brown in show for Gypsy who is becoming quite a special animal and who will now go on to the Alpacafest in Melbourne at the end of June and has probably earned herself a place in the Nationals in October.

And Puck? I’m starting to wish that we’d given him a more macho name... We were working through characters from Midsummer Night’s Dream at the time – he should have been an Oberon! (mind you, I suppose it could have been worse, he could have been a Bottom...). Puck will now be DNA tested and certified for stud work. Hopefully he’ll start working for his living in the Spring.

Back home and home alone

Have to admit that it’s good to be home although it’s been an interesting week. There’s some sort of unwritten law that says that when you visit the UK, you have to come back with a cold.
Not normally a problem, but now is not the best time to get in off an international flight via Hong Kong sniffing and coughing. My week as a bio-hazard has been a different experience, but at least I now have a certificate that says I’m not going to spread swine flu around Australia...

It’s amazing just how much the land can change in such a short time; I was only away for just over a week. When I left, the weather had started to change, it was beginning to feel distinctly autumnal and there had been some rain but the paddocks were still dustbowls and what grass there was was mostly brown. Now, after nearly two weeks of light rain, you’d hardly recognise it as the same place. 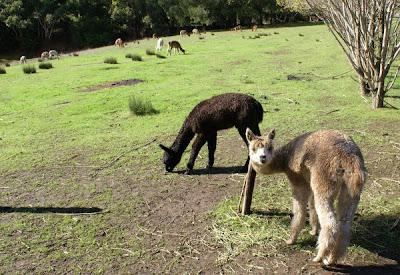 Suddenly, everything is green again
So this weekend I’m home alone holding the fort while the rest of the family takes the core show team (Drifter, Puck, Gypsy, Lulu and Chorus Girl) down to the Stawell Show in Victoria. Hopefully they’ll bring photos back for a blog update on Monday. We have wonderful neighbours who are always happy to look after the menagerie if we go away, but as we have one cria having a supplementary bottle three times a day and another getting over a case of staggers who is still having B1 drenches, it’s a bit too much to ask, so someone had to stay and, as stereotypical pathetic self-pitying male with a cold, I was the obvious volunteer. 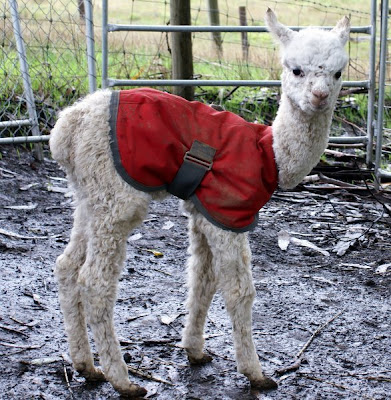 Yes, that is milk all over her nose
We still haven't decided what to call our latest arrival, a light fawn girl by Windsong Valley Wilde Star out of an Auzengate mother, but she's a pretty little thing.

And, I know this is daft, but I'd swear the mum, who isn't producing quite enough milk, looks quite hurt when she takes her bottle...
Posted by Perry Wheeler at 2:39 PM 3 comments:

Day four back in the old country and, well, there’s only so much that you can get out of dealing with bureaucracy and making up for lost time in fish and chips and real ale. I don’t remember it being so humid here, I suppose that I’ve got used to the dry climate of South Australia and it seems sticky – needless to say I brought mostly cold weather clothes with me – so I’ve been renewing the commercial relationship with Marks & Spencer’s.

I’m missing all the fun at home as well – Mikayla, our oldest alpaca, a brown Auzengate girl, had the last cria of season the day before yesterday, a light fawn female (so we’ve only had three males this year!). Apparently she looks nice but is needing some supplementary feeding. Miranda, who is only just over a month old, gave us cause for concern when I left on Friday. We were just putting my bag in the car when Sarah called me over to look at her – overnight she’d developed a bad case of staggers – a terrible thing to see in a cria, they go downhill so quickly. Thankfully it looks like we caught her in time, dosed her up with vitamin B and it looks like she’s recovering nicely. It’s a busy time of the year, with National Alpaca Week in full flow – not the best time to jump ship for a week.

Still, it’s been good see some of the old haunts – to see what’s changed and what hasn’t and to indulge myself with the camera (and Photoshop in the evening). Here’s a couple from Deal and Walmer taken yesterday... 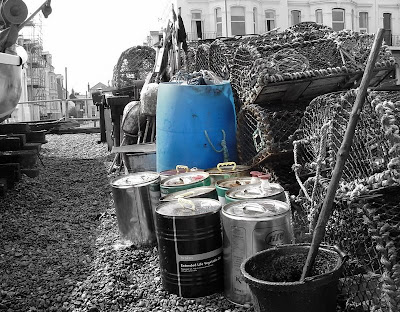 Although there are only five or six commercial fishing boats winched up onto the beach these days, they still bring in some of the best fish I've ever eaten

See, it isn't just in Australia that you can see miles of deserted coastline...
Posted by Perry Wheeler at 5:49 PM No comments:

Many thanks to everyone who welcomed me or said hello today at the South of England show. I had a good time and it was a great chance to have a look at the quality (and size!) of some of the animals there.

It was particularly impressive to see Suris being judged with a year's growth against fully fleeced animals without being disadvantaged.

It's not been one of the best of weeks but this made a great break.

Things I've found so far that I've missed about England:
Things I don't miss:
Thanks again folks and, Sara from Appledene - go on... type a message here or on Rob's blog. Before you know it you'll be writing one of your own!

Perry
Posted by Perry Wheeler at 4:28 AM 4 comments:

Well, that's another module of study out of the way, so I thought 'here's the opportunity to get back to some blogging for a month before the next one starts' - Studying is much harder than I remember.

You know what they say about best laid plans and all that... The module finished on Wednesday; on Thursday we get a call from Canterbury hosptal in the UK to say that my father is very ill and on Friday I'm on a plane to London.

While I'm here, I see on the BAS site that it's the South of England show this long weekend - if anyone reading this is going on the Monday and you see a fat bloke in a Prados Alpacas shirt being nosy - come and say hello.
Posted by Perry Wheeler at 5:47 PM 1 comment: