The joy of unemployment

The Joy of Unemployment

Well, not real unemployment of course, but I’m currently taking a few weeks off for study, farm work and R&R between jobs having called it a day (it was time for a change) at the University a couple of weeks ago.

So I’m currently living the life of the gentleman farmer and loving every moment of it.

It is, of course, monstrously difficult, getting up in the morning to say goodbye to Sarah and James as they go off to work...

So what’s the day like for an unemployed IT manager on an Alpaca farm in South Australia in January?

First comes the first check of the day of the maternity paddock, there are nine animals in there at the moment, three new cria with their mums and three expecting very shortly. Hmmm, Mali is looking a bit ‘bulgy’ but I doubt that it will be today.

Then, feed time for Rudolf, he’s the oldest of the babies in the maternity group, but was a ‘failing to thrive’ cria and has been getting two supplementary feeds each day. He’s doing well now but still needs topping up.

Feed the chickens and collect the eggs then a bit of quality time with the boys over a mug of tea and some lucerne (I had the tea).

Five minutes of Frisbee playing with Ghandi the lab, then get the head down for a couple of hours serious study and a job application.

After another maternity paddock check (all OK), a quick few lengths in the pool, get dinner planned for the workers when they get home later and then the difficult decision... There are some jobs to be done – fleeces to box, shelves to go up in the new office, I really should look at adding some more channels to the CCTV system, there’s some wiring to be done and there’s always fencing and irrigation to work on.

Alternatively, I could take Gandhi down to the beach for a run in the surf...
Posted by Perry Wheeler at 12:58 PM 1 comment:

I just thought I’d put together a quick post about a problem we had today, it may help other breeders with the same issue.

When we first checked the maternity paddock this morning we noticed that one of our new babies had a problem with one of her eyes, it was weeping a lot and attracting the flies. We seem to have a lot of problems with eyes and grass seeds and always keep a tube of antiseptic eye cream on hand for problems like this.

On closer inspection though we found that she had a nasty little nick in her top eyelid. 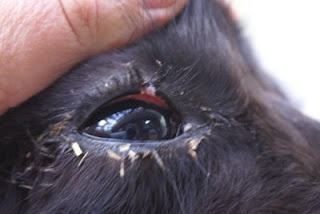 We treated this with antiseptic, but the problem remained of putting a dressing on it to avoid corneal abrasion during healing and to keep the flies away. Anyone who’s had to put a head dressing on a cria knows how hard it can be to do anything that will stay on.

So we tried a different approach and, so far, it seems to be working.

We used a knee length stocking 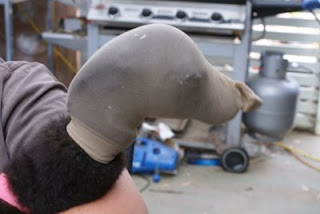 Trying it on for size 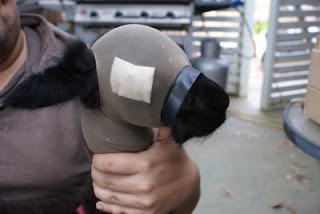 Ears out and a dressing pad over the eye.
Tape at the muzzle end to stop it slipping up 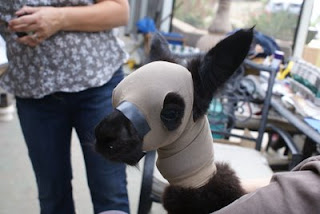 No awards for best dressed alpaca...
Her mother had no problem accepting her back after a couple of moments hesitation.

I'd love to know what caused the injury though.
Posted by Perry Wheeler at 9:07 PM 7 comments: