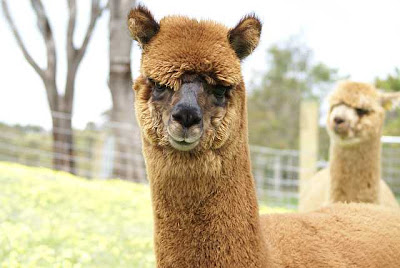 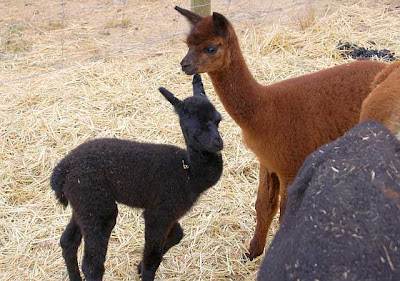 Caramello beyond sniffing her little one did not want to know and the little one did not want to move. Greg our vet arrived at 5.30pm to check both mum and baby. Both were fine and we started bottle feeding every 1.5 hours until midnight and then again at 3am and luckily by 6am little one started to feed from mum when we went to feed her. We were really pleased as Greg had said that if feeding was not happening by 9am it would have had to be plasma and we didn’t want that. Greg questioned if this was a premature cria as her teeth hadn’t erupted in fact she was 6 days late. The next few days consisted of going over to Caramello regularly to get her to stand up so little one could feed. They have at last got their act together and Caramello is beginning to look her like old self. It is easy to see her cria in the paddock, not only is she still the smallest but she has yellow tape on her ears holding them in shape. I have to say we are hopeful that she may become a show girl as her fleece at this stage looks really promising.
Posted by Perry Wheeler at 8:26 PM 4 comments:

I know most of the readers of this little blog are based in Europe but I'm sure that, at least through the bloodline of many of your animals, you know know a fair number of Australian breeders.

Many of them, some large and well known, most small, are in Victoria, in the middle of the worst bushfire that we've seen here.

At the time of writing this, there have been 173 confirmed fatalities and there are still 25 fires that haven't been controlled. Property, land and stock loss will be catastrophic. There are already stories hitting the newswires about small alpaca breeders who have lost some of their herds or pets.

Of the well known studs I know that Flowerdale and Canchones are OK at the moment but are still facing a threat. I've just heard that Jigaru are OK.

For those of you in Europe that use Mariah Hill, the Bunyip state park fire is close and property in the area has been lost. I understand that so far, they're OK but smoke will be a problem for them.

Coordinated efforts to help are being set up by breeders around the country offering shelter and food for animals and families.

You can follow the news at the ABC here

Our thoughts go out to those who have been affected and to those (mostly volunteers, including our own South Australian Alpaca Association president) who are fighting the fires.
Posted by Perry Wheeler at 1:09 PM 5 comments:

Jumping on the video bandwagon

Following on from the critical acclaim poured onto Paul's epic video on Debbie's blog a couple of weeks back I thought I'd have a go myself.

Well... Actually I didn't. I took the camera down to the paddock for today's arrival and set it to video by mistake. Once I'd started, it seemed like a good idea.

So... the mum is Compass Zahava. We purchased her as one of a group from Ambersun Alpacas in 2007. At the time she was carrying another of our Jolimont Warrior offspring (more about that little lad in a later post when he's done a few shows). She was mated last year to Waradene Dutch Chocolate and has just dropped this nice looking solid black boy (I hope it's not going to be a boy year!)
Posted by Perry Wheeler at 12:13 PM 2 comments:

Before long, we're going to have to invest in a gun to do the injections with. I'm not sure of the point at which it makes economic sense to throw away the syringes, but I think we must be close, I know the queue at jab time is getting longer and I think it's probably kinder to the animals - there's always at least one that jumps and bends the needle.

We routinely give ADE vitamins and 5 in 1 vaccination twice each year to each of our adults. The 5 in 1 is recommended primarily to protect against clostridial diseases and the twice yearly regime seems to be the average over here 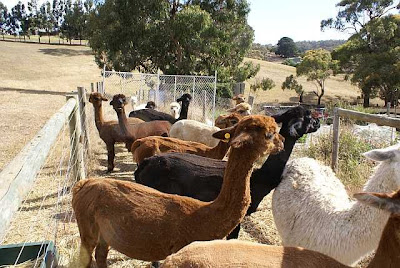 First shift of patients waiting for the needle.
Well, That's the first month of blogging. It's been an interesting experience so far and finding out that there is a small but active alpaca blogging community out there has been a revelation - thank you all for your support and encouragement.

There are so many things that I want to write about, but posting frequency will probably reduce (but not stop!) over the next couple of months. It's study time - I'm currently working part-time on a masters, 8 weeks on, 8 weeks off, 20 hours per week during module time and the next module is just starting. That leaves very little time for anything else. But who knows? I may even be able to talk Sarah into the occasional post...
Posted by Perry Wheeler at 9:17 PM 3 comments: