How lucky can you get?

So, there we were, a quiet Sunday morning (ok, maybe not that quiet) of matings, Most of the stud boys are waiting their turn in the shearing shed, three are out working in the yards and Colin the suri (who doesn’t play well with the other boys is round the back in the old sheep pens).

I’m just going to get another of the boys out when there are a series of cracks that sound like gunfire. James shouts ‘Get out of the shed… Run!’ So I do.. The gunshots have now turned into something that sounds more like an explosion as a 25 metre pine tree starts to fall toward us from the road outside. 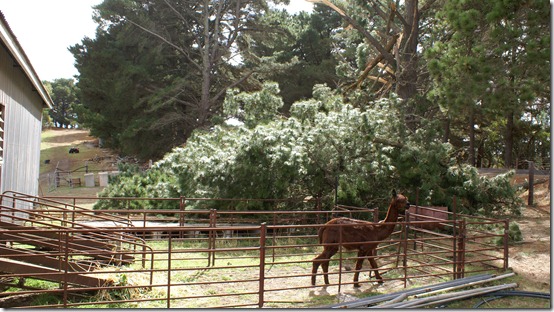 It takes out one of the few new fences we have, crushes some of the pens and just misses Colin, who is currently a fairly stressed alpaca… 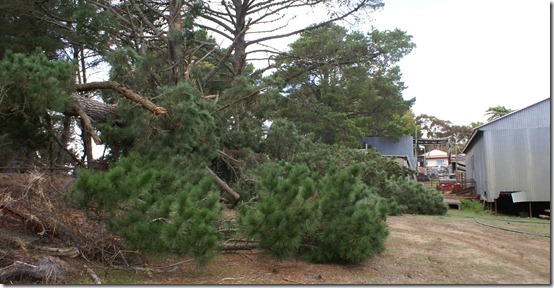 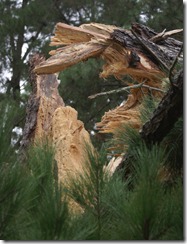 Thankfully, it just misses the shed and there are no injuries. Turns out that the tree has been eaten all the way through by borer beetle and its centre was largely sawdust.

As the tree was on the roadside, hopefully the council are going to come to the party to help with the damage and the clear-up.

At the moment I’m more concerned about the trees closer to the house. I think we’ll have to have them all inspected fairly quickly… 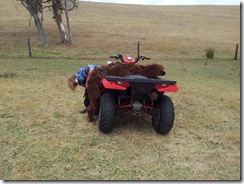 Posted by Perry Wheeler at 8:50 PM No comments:

Something a bit different for this one…
Here I am, home alone, thinking of all the things that I should really be doing rather than sitting here typing words into this blog. Why home alone? It’s Sydney Royal Easter Show time, we’ve got babies due, we couldn’t get a farm-sitter and I either drew the short straw or the long one, I’m not sure which yet.
So, all being well, this blog will last all weekend, updating as we go along.

7pm Home from the day-job and time to get ready for the troops to leave. Loads to do, collecting all the show support kit, gathering together the show team, running repairs on the trailer (why do we leave these things to the last moment?)
8:15pm The quad dies at about the furthest possible point from the house and sheds and has to be towed back.
9:15pm Quick break for something to eat then back to preparation – we’re bound to have forgotten something, but it looks like we’re ready.
Midnight That will do, time for bed

3:15am 3:15? Really???? That’s no time for an alarm to go off in a civilised country!
Load the team up; boys in the trailer, girls in the van itself, do the last minute jobs we forgot or ran out of time for and…
4:20am The team hits the road. Google maps says that it will be just under 15 hours of travelling (without stops) and 1375km, that’s about 854 miles in old money. And to think how I used to whinge, back in the old country, about the 550 miles drive for holidays in Southwest France. Me? I’m going back to bed.
7:20am Phone call from Sarah – Road closure on the Mallee Highway “we need a new route and we’re not convinced about what the SatNav is offering” Google to the rescue again, but it’s going to add another hour and 100km to the Journey. Stuff it, I’m going back to bed again.
Later… (No, I’m not going to admit what time I got up) Morning farm stuff, bottle feed to do, water to check, quick patrol of the paddocks (not so quick without the quad though). Blog.. Self indulgence time. There are two things I actually like about being left behind for shows, first, no-one tells me to turn the volume down – currently listening to the current ‘Of Monsters and Men’ CD at a level that has the dog hiding in another room and the other indulgence is food – I love cooking and I can try things that I wouldn’t normally risk with the family. This evening will be short-rib of beef slow cooked for 8 hours with a red wine and juniper jus and pureed root veg.
12:40pm Text message from the travellers – ‘Just coming in to Balranald’ What? They must have back-tracked to get back onto the original route – that’s cost them 2 hours – According to James it took them 4.5 hours just to get out of the State.They won’t make the 8pm show deadline now. Be lucky to get there for 9. For a large part of the journey they only saw 5 other vehicles – two of them were a police car and the speeder that it had pulled.

The main road back to Balranald – at least it’s sealed
6pm and they’ve reached Wagga – 4.5 hours or thereabout to go but at least they’re through the Hay Plain. Always feels like you’ve broken the back of the journey once you’ve crossed the plain. For those of you who read this blog in Europe, let me take a moment to explain a bit about the Hay Plain. It’s big and it’s plain – that’s it really. About one person for every 5 sq km, but as most of them live in the town of Hay, it’s pretty empty out there. Crossing it on a previous trip I stopped and took this picture (a 180 degree panorama) because I was so excited to see a tree…

It’s only a bit over 200km across but boring doesn’t come close… BBC radio podcasts and audiobooks help to maintain sanity.
Meanwhile, back at mission control I’m being a good little house husband, domestic stuff and a bit of fishing. Yes, we’ve been here since October, there’s lots of water and it’s been driving me mad that I’ve not had time to drop a hook into any of the dams.So, this evening, I made time and can confirm that we have fish – I didn’t manage to land anything so can’t say what they are, but I can, at least, now imagine the one that got away.
8pm They’ve made Yass – now the difficult stuff starts as it gets dark. It’s looking like an 11pm arrival – I hope someone is there to let them in to showground, turns out that they could not have booked in until tomorrow morning anyway – should have double-checked.
11:30pm The good news is that they have arrived at the Showground, the bad news is that security won’t let them in. Looks like they might have to sleep in the van – bearable for people but getting a bit much for the animals. I feel a letter coming on…

00:40am Someone has relented and let them in. I look forward to hearing what form the negotiations took.
7am Looks like they had to wake the convenor up to get in, that’s not good. But they’re sorted now and getting ready for the judging to start tomorrow.
A bit about Sydney Royal for those that don’t know it. Pretty much everyone would agree that this is the country’s second most prestigious show. After the Nationals, a ribbon from Sydney is the greatest accolade you can get. Classes are big and competition is tough, it’s the first really big show of the year and it gives some idea of how the show year is going to pan out. Unusually, it’s a show where you get to stay in the pavilion, each row of pens has a large plywood box at the end. It’s these boxes that are your home for the next 5 nights. 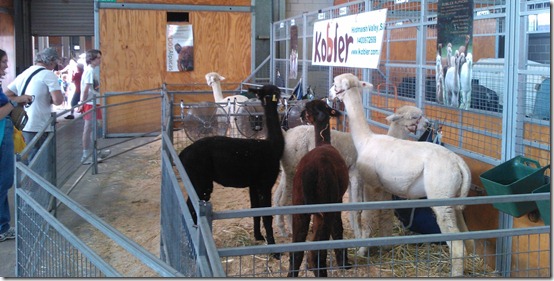 5-Star Accommodation
Midday And, just in case I forgot why we decided to leave me behind to mind the farm… 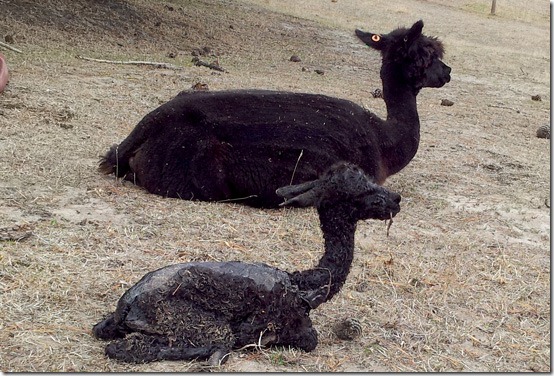 To Beatrice and Puck, a solid black boy – now that could be an exciting mix.
And the quad works again – I’m not one of nature’s natural mechanics – I do computers, not engines, so I’m feeling pretty smug at the moment.
Now it’s spit-offs and matings time… What fun!

4:30pm A quiet start, we only sent one Junior so that’s the only activity today. Belalie is a pretty special mid/dark fawn girl. It’s a big tough class and she gets a second. No one goes looking for a second, but it’s actually a good result – it’s her third outing and her third second place to a Softfoot animal with very similar genetics who then goes on to win a broad ribbon. It’s quite possible that she’s currently one of the top three in the country in her class. Apparently it was a line call with the judges taking a long time to make the decision between the two of them – the Softfoot animal then went on to win res junior champ.
Back at home it’s all boring stuff – I’ve had to be content with spending most of the day wiring in the loft.

Posted by Perry Wheeler at 1:50 PM No comments: