Now, I’m not a regular Facebook user but I do drop by a couple of times a week to see what’s going on and throw in the the odd comment or picture.

There are quite a few Alpaca breeders there though and there was a conversation a few days ago that raised the subject of Vicugnas (or vicuñas).

Anyone who’s had to listen to me prattle on about the subject will know that I have a soft spot, verging on the obsessive about these beautiful animals. 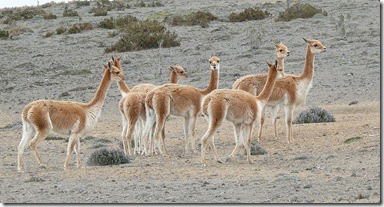 It all started a couple of years ago when I was writing a short article about alpacas and included the Latin name – Lama Pacos in brackets afterwards I thought I’d better check the spelling, typed ‘alpaca pacos’ into Google Scholar and began an 18 month search, during which I had dozens of online arguments, read many published papers, learned more than I ever wanted to know about Camelid genetics and spent some interesting time on my last visit to the UK with the curator of mammals at the Natural History Museum. I’m confident enough now to say that I keep and breed Vicugna Pacos rather than Lama Pacos.

You may be familiar with the story of the full name and heritage of the Alpaca but I wasn’t, so I’ll share a tiny part of it here.

The wild South American Camilids are the Guanaco and the Vicugna (both descended from a common ancestor, 2 million years before). For more than 250 years the zoological establishment believed that only the descendants of the Guanaco (lama Guanico) had been domesticated and that it was from this line that the modern Llama (Lama Glama) and Alpaca (Lama Pacos) came. It was thought that the Vicuna (Vicugna Vicugna) had never been domesticated and remained an independent line.

Then, in the mid 90’s, along comes Jane Wheeler (no relation unfortunately) and a group of archeozoologists who claimed that evidence from Peru suggested that the Alpaca was bred from the Vicuna 6-7000 years ago

To cut a long and fascinating story short, in 2001 Wheeler presented a paper to the Royal Society showing clear DNA evidence that the Alpaca was a direct descendant of the Vicuna rather than the Guanaco. So, genetically, the Alpaca and Llama are cousins rather than siblings.

Today, the V. Pacos name is accepted by most authorities and is gradually gaining ground in the scientific community, a quick search on one of the leading research databases finds 18 papers published in the last year that use the Vicugna form against 67 that use the Lama form – these things take time. Officially, either is acceptable for publication.

It goes without saying that I’d give major body parts to have the first Vicunas in Australia. It’s not going to happen of course, the Vicuna is still threatened, having been brought back from the brink of extinction after a great conservation success story, even now though, there are only a little over 125,000 of them living protected in South America and definitely not for export.

Every so often though, we do get a throwback – meet Flossy 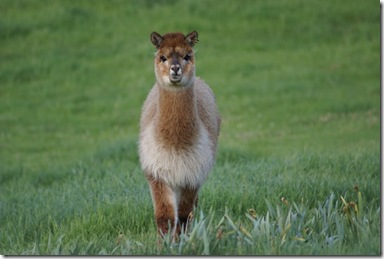 Flossy is James’s rather than ours – he beat me to the wallet. She is probably one of the closest to Vicuna type alpacas I’ve seen in Australia and has just had her first Cria – it looks pretty special.

Jane Wheeler has most of her work and a lot of other fascinating stuff on South American Camelids on her website at http://janecwheeler.com/ A lot of it is in Spanish, but Google makes a reasonable job of translation.

Posted by Perry Wheeler at 4:04 PM