The first cria of the New Year should arrive any time now. It shouldn’t really be for another two weeks, but she looks ready to pop. I suppose that’s one of the things that make the difference between a small breeder and a large one – for the smaller breeder, each birth is eagerly anticipated and fretted over, you make sure someone can check on the animal every few hours and when it happens it’s a significant event. 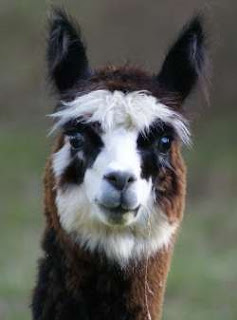 And this is going to be an interesting one. Juno is a strange beast – more a pet than part of our breeding program. We picked her up from a farm where she had been purchased as sheep guard/pet but hadn’t really worked out for them. She’d not been mistreated at all, but she wasn’t in great condition either. Our intention was really just to give her a caring home and use her as a companion for any animals that had to be separated from the main herd. From a breeding point of view I couldn’t even begin to list the things that are wrong with her but, female alpacas really don’t like not being pregnant or having a youngster to fuss over so last year we tried an experiment. Although her lineage is solidly huacaya, she does have some suri characteristics and her fleece is, while far from being show quality, a real pleasure to work with. So, we mated her with a really good champion suri and are eagerly awaiting the outcome – it won’t be a show animal, but it should make someone a wonderful pet.
Posted by Perry Wheeler at 1:09 PM