Quality time with the animals is something that is getting more and more difficult to achieve these days. With a fulltime job and a growing herd there’s always something that needs to be done. But it was a lovely afternoon today, it’s a great time of year here, it’s warm, but not yet the blistering heat of February, so, in-between jobs and for the first time in weeks, I found an hour to just sit with some of the girls.

Last week, I went out on a boat to go swimming with some of our local dolphins. I mention this because it occurred to me afterwards that the approach that is taken these days with wild dolphins is exactly the same as the way that I like to relax with the alpacas. The boat approaches a pod without intruding, swimmers get into the water and from that point it’s up to the dolphins. If they want to go off and feed or do their own thing then that’s their choice, but they’re curious creatures and more often than not they will come over to check us out and sometimes will stay to play.

I like to work the same way with the alpacas, going to the paddock and just sitting down close to a group of animals and letting them decide whether or not to visit. Usually they do, after a few minutes, the first ones saunter casually over to see if I’ve got any lucerne or grapes. They’re soon joined by more and we go through the ritual of ‘alpaca kisses’ the gentle nuzzling and sniffing that is such an important part of alpaca socialisation. After a while most will wander off, but not too far, while others settle down in the grass nearby.

And then there’s Madison... 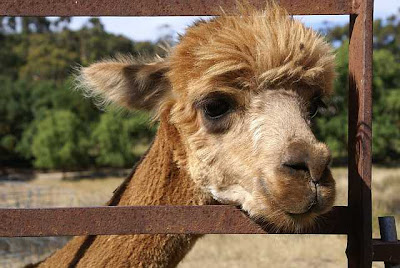 Maddy isn’t like any other alpaca I’ve seen. I always go to great lengths to tell new owners who want pets that alpacas are wonderful but they’re not pets in the same way as cats or dogs are – they know their regular humans, but they’re not going to climb up onto your lap for a fuss. But, then there’s Madison – the exception that proves the rule I suppose. 10 minutes after sitting down she’s there, sitting next to you with her head in your lap or on your shoulder demanding a neck rub. Soft as anything, but good therapy all-round.
Posted by Perry Wheeler at 10:12 PM