Whenever you go to a show, whenever someone new to alpacas asks questions, you know that it's only a matter of time before the spit question comes up.

My answer is generally the same - one of the most appealing things about our animals is that they all have their own individual characters - a bit like people. Most are normal - they'll only react if provoked. Some live in world of zen tranquility (we have quite a few of those) and never spit. But, just occasionally, you get a street-fighter with a short fuse and a bad attitude. 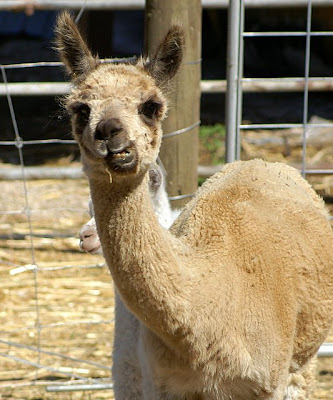 Kirri loading up for another shot..
We brought Kirri last year, a nice animal in her own right, pregnant to Jolimont Warrior. She duly gave us our last cria of 2008, 'Summer's Dream', on Christmas Eve. 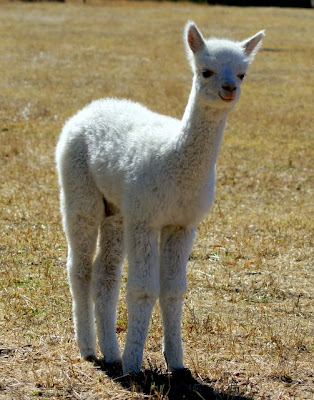 "My mum's tougher than your mum!"
So today was the day to move mum and daughter out of the maternity paddock to rejoin the main herd. I suppose I asked for it - taking her baby and interrupting her breakfast - turn and fire! A facefull (and mouthfull) of half-digested hay had me spluttering, retching and racing for a tap. Two hours later, a couple of washes and a shower and I can still smell it on me.

But, got to show them who's boss. Success on second attempt (at least as far as I was concerned, this time it was Sarah who received the blessing). 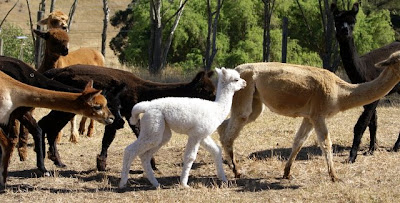 Checking out the new arrival
She's happy as anything now - loves being centre of attention. I doubt that I'll ever get tired of watching the way that a new arrival is fussed over and thoroughly checked out when they join the herd.
Posted by Perry Wheeler at 11:11 AM