Mustardseed was born in May 2008, a little later in the year than we like as winter is beginning to show its face and we like to have the youngsters well and truly established before the bad stuff starts in July.

From day one it was clear that she was a bit special, medium fawn with one of those shiny, almost ‘glow in the dark’ fleeces that promise so much on a cria (even if they don’t always deliver).

She did well through to the beginning of August when we had some bad weather (yes, it does happen in Australia!). Alpacas are hardy critters, but a combination of cold, rain and wind can really challenge them when they’re young.

In the second week of August she was clearly having a bad time of it; we coated her, gave her some b1, and had to bring her indoors a couple of times to warm her up. 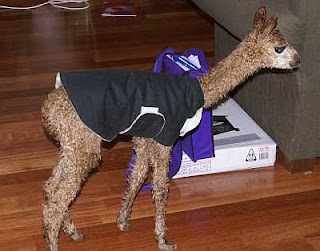 Finally, on the 14th I found her in the maternity paddock where we were keeping her (lots of shelter and close to the house) on her side with her neck thrown back in obvious distress. We warmed her up again but she was clearly in trouble and couldn’t put any weight on one of her back legs – time to call the vet. 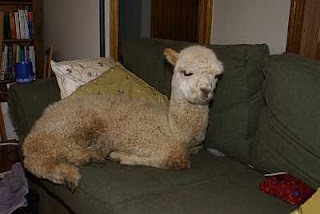 The vet couldn’t see anything wrong but agreed that there was a problem somewhere. He gave her a painkiller (Flunixil), antibiotic (Rilexine) and more b complex to try to cover the all bases with the instruction to keep her warm and bring her back the next day if there was no improvement.

We took her back and after a series of x-rays they found that she’d broken her hip. This is one of the things that new breeders have to come terms with – Alpacas are tough. Generally, that’s a good thing, but it means that often they only have two states, healthy and near-death and the transition can be very abrupt.

Luckily, our vet is a camelid specialist, rather than difficult surgery or putting her down as some would have done, he recommended that we do absolutely nothing... That we put her and her mum somewhere warm and comfortable, with minimum opportunity for movement and see what happens. So, for the next couple of months we had two alpacas living in a tent on the lawn outside the house.

I’m delighted to say it worked. Recovery was slow but steady. We even managed to shear her in October, although we did bring in a professional rather than doing her ourselves to minimise stress. She’s now back in the herd and has done so well that she will be in our show team for the first show of the year in March. 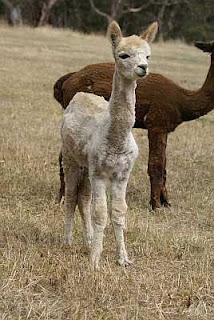 Posted by Perry Wheeler at 9:36 PM