I don't know what it is about shows that makes them so physically and mentally exhausting. I meant to post this last night when we got back, but all we could manage to do was flop down and drink fizzy wine - Yup.. we were celebrating.

Quick recap. Mt Pleasant is the first show of the year for for us, a short-fleece event to start off the season. We were taking a show team of eight alpaca, four boys and four girls, the largest team we've shown, a mixture of high-hopes and try-outs.

The day didn't start well, it was raining for a start - normally we'd be thrilled about that, but not today.. Not today! We were running late, there were words...

But we made the showground in time (by minutes) and got settled in. The rain had stopped and the mercury started to rise - it turned into one of those horrible days that are thankfully very rare in this part of Australia, 35 degrees, but instead of our usual dry heat it was humid and sticky.

Judge for the event was Peter Kennedy from Canchones - He's an international judge, so some of you reading this in Europe and the US may have met him.

The show started with the Suris. We only had one Suri entry for this one, Lysander. 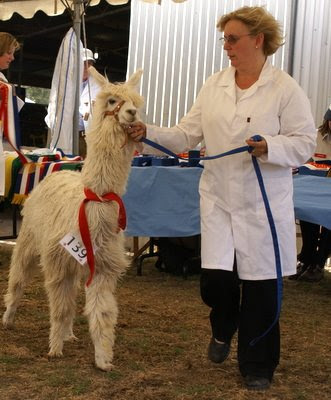 Second place for Lysander
We were thrilled of course to get a placing in our first class, but it was a small group (suris were poorly represented this year generally) and when Peter picked out the differences between first and second placings, well... we're still not sure of young Lysander's future career. 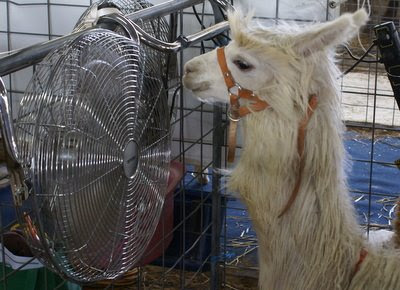 Lysander cooling off after the stress of his show appearence
Next came the big class for us, Junior brown female. No photo's of this I'm afraid as we had three animals entered so we were all showing rather than snapping. We seemed to be out there for hours, it was a tough class. Hermia and Chorus Girl missed out (although not by much in Chorus Girl's case). But (drum-roll....) Gypsy came first. We thought she was special, we were confident that she'd come away with something but first in that group was something we'll be glowing about for a long time.

So, Hermia is still a nice animal and will form an important part of our breeding program, Chorus Girl we'll show some more - she's a much better looking animal when she has a full fleece on and Gypsy... well, more about her later.

Gypsy was straight back into the ring for the best Junior line-up, that wasn't going to happen against the elite whites and light fawns, but at least it let me get a picture: 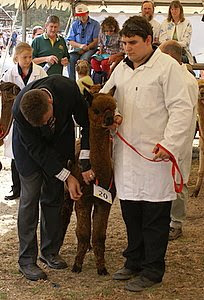 James with Gypsy being checked over again by judge Peter Kennedy
By this stage the day is becoming a bit of a blur..

Next came another of our tryout entries - Lulu. Lulu is a girl we brought as a good fit with our breeding program, but she's come on really well so we thought she was worth trying out in a show. It was a much smaller class than the Juniors, but she won us our second first place ribbon so she's coming with us to Stawell in Victoria in May. 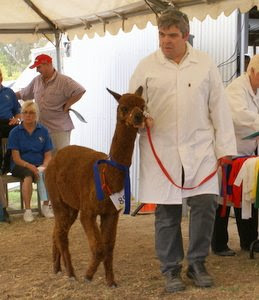 Yours truely with Lulu

Our next two were up against tough Ambersun competition, second place ribbons for both. 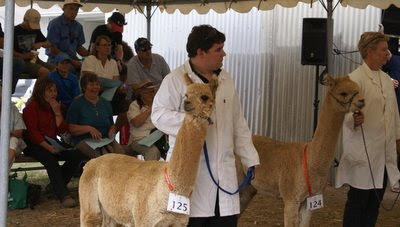 James with Drifter (Ambersun Futuris is the one the right, he came second in class in the nationals last year)

Finally, as if the day could get any better, it's the best of colour classes. So we're in there with Gypsy and Lulu and all the other brown first-place winners, eight blue ribbon winners in all and again, it seems to take ages.

He collects the big green ribbon with the gold edging...

He ties it around Gypsy's neck...

This is silly, but typing this a day later I've started shaking again... 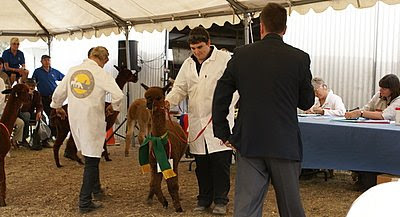 Best brown alpaca in show
Total haul for the day, Two firsts, three seconds, three unplaced and a best in show in colour.

That's it until May now for the next show. But, for the time being, we're walking on air.