Primarily, we’re huacaya breeders. We specialise in colours ranging from mid-fawn through to dark brown and that was originally meant to be it. But these things rarely turn out as planned and one of our excursions into the unknown has been our suri experiment. We now have nearly 50 of them on the property and they’ve been good to us. It was a suri that gave us our first interstate broad ribbon and last year we landed the Grand Champion suri trophy at the Royal Adelaide Show.

At the centre of our suri herd has been Arequipa Colin, a dark brown stud male that we purchased, on a whim, at auction. 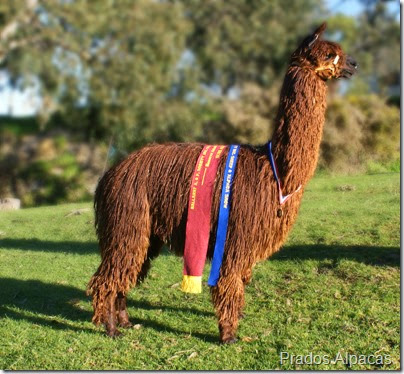 Colin has done us proud but, sadly, we lost him last year to a bite from a brown snake.

A few weeks before that however he’d been less than popular. He escaped from his paddock and followed a group of girls back from matings into their paddock. We found him a couple of hours later, looking exhausted, covered in spit but with an evil, satisfied glint in his eye. That left us with a problem, there were nearly 50 girls (nearly all huacaya) in that area, most had been mated either that weekend or within the last month, some to outside males. We couldn’t possibly flush them all and we had no idea who, if any, he had mated with. We just had to wait and see and hope for the best.

We now have six first-cross suris to sell off as pets – so that was 6 successful matings inside two hours – annoying, but impressive.