We’ve seen some behaviour in the maternity group this year that we haven’t noticed before.

I’ve mentioned before that, like many other breeders, we run a maternity paddock, an area close to the house where we bring in the girls about 2 weeks before they’re due and for the first few weeks afterwards. We’ve seen three interesting behaviour patterns this year, two of which are new to us.

The babysitting service
Nothing new here, fairly common practice, but still good to watch. One of the mothers (and the duty does seem to rotate) is designated babysitter, she goes off with the crias while the rest of the adults congregate for a child-free feed, dustbath or a drink and chill-out session.

The defensive wall
Haven’t seen this one before. Occasionally a fox, kangaroo or other perceived threat passes through (although the foxes seem to have learnt to keep well out of range!). One or two of the girls herd all the babies into a tight group and then they all form a barrier around them, either a complete circle or a semi-circle facing the danger – any fox that’s hungry, brave or stupid enough to fancy cria for supper would have to first pass though a wall of kicking, spitting angry mothers. Watching it happen reminds me of old westerns – form the wagons into a circle…

The milk bar
Alpaca mothers are usually strict about making sure that they only feed their own offspring, they can even be quite rough with any interlopers. But that all seems to have relaxed this year. Possibly because there’s very little natural grazing in the maternity paddock this year so we’re feeding out – the result is that there’s is no competition for food – there’s plenty for everyone. Yesterday Mali, a big Suri mama, was feeding two simultaneously 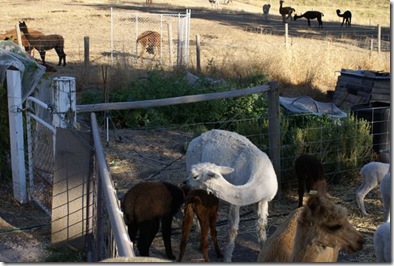 They don’t seem to mind this year – some of the babies (not all) just grab on to whoever’s handy at the time.

Then there’s the girl with the human chin fetish, the near-adult that wants a bottle, the one that we’re going to have to book into the Betty Ford clinic to get off her lucerne habit and the one that used to be psycho-paca but has suddenly turned as soft an anything…

Posted by Perry Wheeler at 9:07 AM