Gypsy does it again!

First the bad news, Puck didn't have a good show, he got really hot and sweaty and every trace of character in his fleece dropped out. He wasn't having fun and it showed. But we learn... Next time he gets his own fan!

After that though the little team did good.

Double first for Goldie (herself and her last fleece)
Second best coloured suri fleece for Colin
First for Lulu
Lulu and Gypsy took third in sires progeny
Gypsy again got first in her class and best brown in show, beating 44 others - she's one special animal. 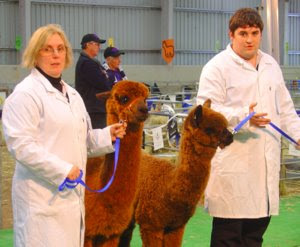 Sarah and Lulu with James and Gypsy
There's no way that we were expecting a year like this.

So, where from here?

Colour Classic and possibly Bendigo in August
The Royal Adelaide and Strathalbyn in September
Then, possibly, the Nationals finishing off with Clare Show, then shearing and a break.

Who knows, we may even sell an animal or two...
Posted by Perry Wheeler at 8:39 PM